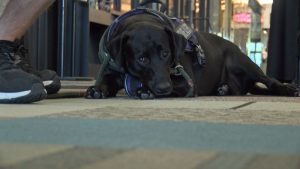 The ruling said an Iowa City landlord should not have exempted a tenant with an emotional support animal from the apartment complex’s no pet policy. However, the justices were careful to say the ruling was specific to the circumstances of this situation and likely would not apply to service animals.

“Our balancing in this case is not a one-size-fits-all test that will create the same result under different circumstances, such as when the animal at issue is a service animal for a visually disabled person,” the ruling reads.

“We are not holding that a visually disabled person with a service dog should be denied access to a “no pets” apartment building whenever a tenant with dog allergies is already living in that building and would suffer allergy attacks from the presence of the dog,” it continues.

Karen Cohen had sued 2800-1 LLC after it allowed another resident to move in with an emotional support animal for a chronic mental illness with a note from a psychiatrist.

After Cohen alerted the manager to her allergy, the manager sought guidance from the Iowa Civil Rights Commission and even offered to move the tenant into an apartment that allowed animals. However, the Iowa Civil Rights Commission said that was not a reasonable accommodation. Instead, the landlord attempted to mitigate Cohen’s allergies by using separate stairwells, purchasing an air purifier for Cohen and exploring installing an “airlock” to reduce the pet dander circulation. However, Cohen still had allergic reactions.

A small claims and district court each dismissed Cohen’s claims, determining the landlord made sufficient efforts to accommodate Cohen’s allergies and the service animal. But the Supreme Court disagreed.

“Frankly, it’s clear that Cohen and Clark cannot satisfactorily coexist in the same apartment building,” the ruling states. The Supreme Court said because Cohen had moved in first, her allergy concerns should have taken priority over the need for an emotional support animal and the landlord should have moved the tenant with the support animal into one of its units that did allow pets.