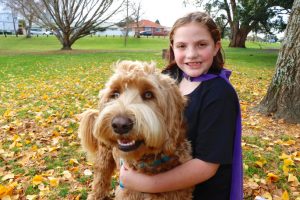 A jovial girl leads a caramel labradoodle around the park, they run up the hill carefree like any other child and their pet.

But there is one small clue that this relationship is different, Mack the dog, wears a blue coat indicating he is a therapy dog.

Tara Highnam is calm and focused as she leads Mack around, but this is unusual for the autistic girl that – as her mum Ash says – ‘lives at the tip of an iceberg’.

Small things can trigger Tara’s sensory overload which can lead to a full-blown meltdown of screaming, crying and sometimes throwing things.

It can be the classroom being too noisy, having a lot of people around her, or being told not to sort the crayons into colours that cause her to “explode like a shaken up bottle of Coke”, says Ash.

“She’s calm, she’s present. She’s doesn’t have everything going crazy in her mind so she just wants to run and get away from it.”

Mackie – as Tara likes to call him – isn’t her therapy dog, they are playing to see what type of dog will be suited to her needs.

Tara says her dog hasn’t been born yet but she will get one.

Ash just needs to raise $13,500. She has a Givealittle page and has received a $2500 grant from the Mazda Foundation.

Once Tara receives a dog it will enable her to live more like a child without disabilities and hopefully go to school full time, says Ash.

The eight-year-old does half days at school because the environment is too much for her.

“It will enable Tara to reintegrate back to the community, because she struggles a lot now, even just to go to the supermarket.

“It becomes too much, too much noise, too many people, the sounds are very overwhelming for her and are huge triggers.”

Ash says the term reintegrating makes it seem like Tara has come out of prison and in some ways her condition is like that.

Tara has ADHD, global developmental delay and sensory processing issues along with autism.

Each dog is trained specifically to suit the needs of their owner says Therapy Dogs New Zealand director Wendy Isaacs.

“The aim is not to produce a service dog that performs tasks per se, but to produce a companion, a friend, because these kids don’t make friends and they don’t get invited to parties and it’s really hard.”

The dogs are also trained to help calm their owner and promote sleep by sitting on a person’s lap and being patted which brings them back to the present.

“They’re relaxed and they’re able to keep the child relaxed.

“They’ve got to have really good obedience, really good social behaviour. A dog they can take with them everywhere because if they have a dog in the home that provides really good therapy, but when they have to leave their home the anxiety increases and they can’t bring it down [themselves].

“There’s just something between a child and a dog that we can’t understand. There’s a connection and something that happens and it just works.”

Mack and Tara’s quick rapport is evidence of this and Ash hopes to have a therapy dog for her early next year.