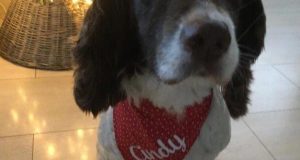 Pd Cindy retired as a bomb sniffer dog in October, but has decided she is not quite ready to hang up her leash with the police just yet.

The spaniel has now been re-recruited by Humberside Police as a stress dog, supporting officers on their toughest days.

So far in Cindy’s nine-year career, she has assisted officers at visits from the Duke and Duchess of Cambridge and HM the Queen, with other highlights including attending the Commonwealth Games in Scotland and Hull City of Culture in 2017.

She has also previously assisted the Police Service in Northern Ireland. After a very brief retirement, Cindy is now joining Humberside Police’s Occupational Health and Well-being Team with her new role as therapy dog.

“Research indicates that use of a therapy dog in the right circumstances has been found to lower blood pressure and to facilitate in releasing endorphins.

“Participants in Animal Assisted Therapy reported decreased feelings of isolation, alienation and other improvements in their mental health and well-being.”