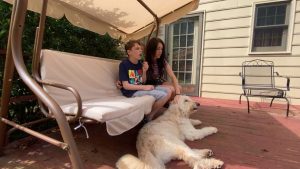 An update on a very sick service dog and the generosity of FOX 5 viewers who are helping to pay for his very expensive vet bills. Caspian is a six-year-old service dog to a 13-year old Fayette County boy with nonverbal autism.

Just one of Caspian’s many vet bills was over $5,000. A bill that can be paid now through the generosity of FOX 5 viewers.

Caspian has a special mission. He is the companion and service dog to 13-year-old Gavin who has nonverbal autism and frequent seizures.

Caspian when healthy alerts Gavin’s family to oncoming seizures and stays by his side.

In June, Caspian began to have severe bloody noses. At the same time, Gavin’s seizures increased in frequency.

Desperate, Gavin’s family has taken Caspian to emergency vets and specialists. They are waiting on a pathology report on a biopsy from his nasal passage. It’s all very, very expensive. Since our first story on Caspian, FOX 5 viewers have generously donated more than $8,000 to a GoFundMe page to support the family’s vet bills.

No one knows the importance of Caspian’s job better than Children’s Healthcare of Atlanta’s Marcus Autism Center. They tell FOX 5, therapy dogs, like Caspian and their facility dog Flip, help kids with autism to socialize better with their peers. They ease anxiety. They also help nonverbal children like Gavin by forcing them to vocalize their service dog’s commands.  And of course, they are a companion who helps to improve development and provide comfort.

The other good news is that so far Caspian appears to be feeling better, but they are anxiously waiting on the pathology report. Caspian is currently unable to detect seizures. But he is still very much on the job in the other important ways that he helps Gavin.