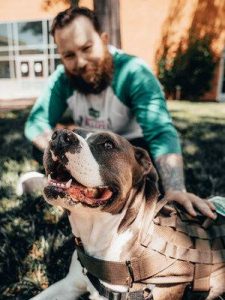 In honor of National Service Dog Awareness Month, Purina Dog Chow is launching its third annual “Service Dog Salute” campaign. A service dog can be life-changing in helping veterans with PTSD and other post-combat challenges. Unfortunately, due to the cost and time it takes to train a service dog, less than 1% of veterans in need can obtain one. Dog Chow is on a mission to help change that. The Service Dog Salute campaign supports the care and training of more service dogs for America’s military veterans — so that every hero in need can find a canine hero of their own.

Placing body weight on the veteran to promote a sense of calm during panic attacks
Waking the veteran from upsetting dreams or night terrors
Reminding the veteran to take medications
Alerting the veteran when someone is approaching from behind
Patrolling the perimeter of a room for triggers and threats
Over the next year, Dog Chow will follow the journey of several service dogs in training that are currently preparing to serve a veteran in need.

To help spread the word about the benefits of service dogs and how dog owners can help, radio and TV personality and avid military advocate Bobby Bones is joining forces with Dog Chow’s Service Dog Salute campaign for a second year.

“Service dogs provide so many benefits for military veterans, but it can cost over $20,000 on average to train one service dog – and less than 1 percent of veterans who need one can get one,” said Bobby Bones. “When our veterans come home from service, they may not be equipped to live their life without these dogs. I’m honored to be a part of a program that is helping more veterans get the service dogs they need.”

Dog Chow continues to help fund organizations that train service dogs for veterans with PTSD. From September 1, 2020, through Thanksgiving (November 26, 2020), for every purchase of a specially marked bag, Dog Chow will make a donation to its two partnering veteran service dog organizations, up to a total of $100,000. The donations will be split equally between the Pets & Vets program at Tony La Russa’s Animal Rescue Foundation (ARF) and Got Your Six Support Dogs. Over the last three years, Dog Chow has donated over $700,000 to support the training of more service dogs for military veterans.

“As a veteran, I am sensitive to the many issues fellow veterans face as they transition after their service; those who faced combat often have the greatest challenges” said Steve Degnan, Chief Human Resources Officer for Nestlé Purina North America. “It’s a privilege to be able to help my fellow service members, and I am proud that Dog Chow supports our nation’s military veterans in such an important and needed way.”

Purina and Dog Chow are also working with members of Congress in support of federal legislation to provide training and service dogs for veterans. The PAWS for Veterans Therapy Act (HR4305) will create a pilot program in the VA to give veterans access to treatment derived from working with service dogs. The bill has been approved by the House, but still awaits passage in the Senate. To support this legislation, Dog Chow is asking supporters to visit DogChow.com/service to send an email to their state senators urging them to pass the bill.