The Dogs That Sniff 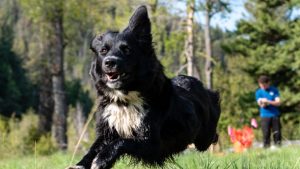 On a sunny, cloudless afternoon in Croatia, a fierce wind known as a bora can whip over the Velebit mountain range and across the Adriatic Sea. When it reaches hurricane force, this cold and dry blast can render the steep, arid terrain—dominated by a porous rock topography known as karst—freezing at midday.

Despite the area’s challenging conditions, humans have eked out an existence here for thousands of years. Archaeologist Vedrana Glavaš, at the University of Zadar in Croatia, grew up in this landscape. “That was where I played as a child and became interested in history and prehistory,” she reflects.

In 2014, she and a team were working on Velebit Mountain when they uncovered parts of a 3,000-year-old hill fort and necropolis. To explore further, she needed more help. In 2015, Glavaš hit upon a surprising and inexpensive innovation: She teamed up with dog trainer Andrea Pintar, whose company Canine Caffe offers specialized “cadaver” dogs that have helped sniff out cold cases for police and find mass graves for local officials.

“Some of the police cases Andrea has worked on are 30 years old,” explains Glavaš. “We both wondered how far back in time her dogs could smell.” What they did not expect was that the dogs would lead them to remains that had been buried in the eighth century B.C. Glavaš, who with Pintar published her research in 2018, says the dogs ultimately turned up more than six unique graves, one some 50 meters away from the rest. Glavaš excavated six of them, yielding stone burial chests, artifacts, and human finger and toe bones.

The dogs proved invaluable, Glavaš says. They uniquely enhanced the capability of typical grave-finding methods, such as field survey, aerial photography, infrared satellite imaging, ground-penetrating radar, and other technologies. And Glavaš isn’t the only archaeologist turning to canine detectives.

Dogs have long been humans’ best friends—fearless protectors, loyal companions, fabulous Frisbee players—and now it seems they may be ideal archaeological assistants too. Like Glavaš and Pintar, other researchers are building on canines’ well-established ability to uncover remains, showing that this skill can be honed to hunt much older quarry.

New research demonstrates that a properly trained pup can pick up the so-called scents of death from remains that are centuries old. Precisely what compounds they’re sniffing out remains a mystery, but the dogs’ efforts could help illuminate bygone millennia.

A dog’s nose can perform at least 10,000 times better than ours. Specifically, dogs can pick up on low-molecular-weight compounds that easily evaporate at room temperature and often carry an odor—what scientists call volatile organic compounds. Canines can detect one such part in every trillion.

As a result, dogs have demonstrated uncanny olfactory abilities. They’ve sniffed out melanoma skin cancer in humans and detected pregnancy in cows just by picking up scents in bodily fluids.

So what exactly are canines detecting at archaeological digs? “Our dogs are not actually searching for bones,” Glavaš emphasizes. “They are searching for the molecules of human decomposition.”

In the case of human remains, dogs could be sniffing for one of several specific molecules. One possibility is that dogs detect the fatty acids in adipocere, a material that scientists have noticed for centuries and is sometimes called  “ corpse wax” or “the fat of graveyards.”

This is a natural byproduct of decomposition. Human fat is converted by bacteria into free fatty acids, which then harden into the soap-like adipocere that can effectively mummify the dead.

Adipocere can also help scientists date corpses. This material has persisted on frozen remains estimated to be more than 300 years old, such as those found in glacier melt in northwestern British Columbia in Canada. In 2009, scientists reported on adipocere found on the 1,600-year-old remains of a child in Germany.