The Research On Dogs 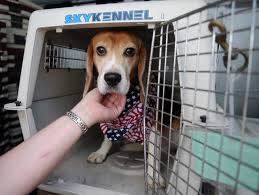 “Humans have experimented on dogs for millennia, because their trust in people and willingness to obey commands makes them easier to work with,” according to a Washington Post article on July 7.

Using this as the main guideline for decades, the VA still conducts cruel and inhumane experiments on dogs at their facilities.

Reps. Dina Titus, D-Nevada, and Brain Mast, R-Florida, in their USA op-ed, related the details of latex injections into the arteries of puppies and running them on treadmills until they died, injecting Dobermans with methamphetamines and subjecting beagles to various invasive procedures.”

The National Academies of Sciences, Engineering, and Medicine (NASEM), issued a report July 1 that has been praised by animal activists because it recommends very narrow use of dogs in research by the VA, and urges the VA to “validate, develop, and apply alternatives to the laboratory dog in biomedical research.”

VA Secretary Robert Wilkie in his statement of July 7 seems to take the NASEM report in a different context, stating that, “canine research is the only viable option for developing and testing certain treatments to improve the quality of life of some seriously disabled veterans.”

Technology makes it possible to re-create creatures that lived millions of years ago, and we have advanced to the point of creating human organs using 3-D printing — and Wilkie wants us to believe that we still need to play Dr. Frankenstein in the medical labs with dogs to help our veterans?

Shalin Gala, vice president of PETA International Testing Methods, states that “VA’s use of dogs in testing does nothing to address veterans’ real health needs.  The same results can be obtained by “synthetically engineered human cardiac tissue and advanced computer models.”

The cost to taxpayers (which includes veterans), for these canine research programs is beyond the pale.   Six VAMC contracts for purchase of canines for biomedical research from January 13, 2017 to April 2019 involved 48 dogs priced at $1,682.92 each for a total cost of $80,780.16.  The genius who brokered this procurement deal is probably sunning his toes on some nice warm beach with an adult beverage in hand!

The VA Office of Inspector General released its findings July 14 regarding non-compliance issues in the canine research studies which cites problems within VA that included lack of communication between people responsible for the continued brutal treatment of dogs and former VA Secretary David Shulkin and current VA Secretary Wilkie.  Shulkin and Wilkie both stated that they did not have prior knowledge to seven research studies. However, the OIG report states Wilkie gave verbal approval to continue these studies at a November 6, 2018 meeting.

It is a lot of finger pointing, which helped no one, and millions of dollars spent on cruel research using dogs.

Chris Green, an attorney with the Animal Law and Policy Program at Harvard Law School, was one of the 15 members of the NASEM study done of the VA biomedical research practices at VA. Green stated that “the justifications that had been traditionally done for using dogs in biomedical research were no longer valid in our opinion.” NASEM suggests that the “VA create a strategic road map for using more experimental methods not involving animals.”

Dogs give the human trust and complete loyalty, and every time one of these animals are used in barbaric experiments; we lose a bit of our humanity.

The VA could do better by getting more financially enthused in supplying service and companion dogs to the hundreds of disabled veterans across the country.

Private organizations across the country do the best they can in helping veterans obtain an approved Assistance Dog, but it is a costly and complicated process for everyone involved.

Contact your U.S. Representative or Senator and demand the end of research on dogs.

Veterans need your support for creation of a program paid for by the VA to see that veterans who need service dogs get them at no charge!