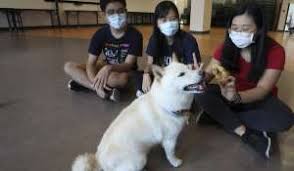 Gohan greets visitors with excitement, jumping up and licking their faces, and holds a special role on Hong Kong University of Science and Technology’s campus to help relieve student stress.

The four-year-old Shiba Inu has served as an in-house therapy dog at HKUST under an animal-assisted support programme introduced at the university last year.

“Studying can get stressful with a lot of assignments. It is relaxing to join a therapy dog session when I don’t have to think about any other things but enjoyment,” said Candy Tang Hau-tung, a final-year student majoring in electronic engineering.

“I learned how to interact with dogs, communicate with them and understand their emotions. The experience is new to me,” added 22-year-old, who has never had a dog or cat as a pet.

Gohan, who was first adopted by a residence master at the university when he was around six months old, was granted an exemption from its no-pet rule and allowed to stay on the Clear Water Bay campus last year as a therapy dog.

Gohan is the second university therapy dog, after the University of Hong Kong introduced one to its libraries in late 2017.

Clinical psychologist and associate professor from HKU’s Department of Social Work and Social Administration, Paul Wong Wai-ching, said touching animals could release stress because it made people mindful of the present.

Walk-in interactions with the therapy dog attracted nearly 200 participants from September to November last year, with 68 returning to the sessions, according to the Dean of Students’ Office at HKUST. The school had also hosted 18 private meetings upon students’ request since December last year.

Tang, who has been a regular participant since last summer, said: “I feel like I understand what he is thinking, his habits, likes and dislikes.” After joining several mingling sessions, students can attend a caring tutorial led by professional dog trainers. They learn how to look after dogs, including walking, feeding and playing with them before becoming Gohan’s regular carers. Final-year student Tommy Kwok Tze-fung decided to step up as a helper for the programme after joining it for three months to guide new participants in the dos and don’ts while interacting with Gohan.
“As a helper, I do not only play with Gohan but also take care of his feelings and reactions,” Kwok said.
In Hong Kong, only 5.7 per cent of households had dogs, according to a Census and Statistics Department survey conducted during March to June 2018, which meant that about 220,000 of these pets were being kept in the city.