Virtual Visits With A Therapy Dog 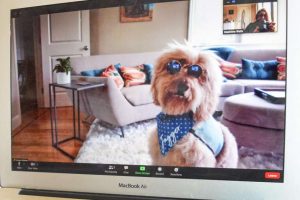 As a member of the SFO airport’s Wag Brigade, a friendly crew of volunteer therapy dogs (and one pig), Jagger’s job depends on delighting large crowds with his adorable antics. But when the coronavirus hit, his job became impossible – just when a stressed-out population could use the sight of a perky goldendoodle the most.

Despite this, Jagger and his human, Cat Torrejón-Nisbet, aren’t taking a break from therapy duties. Instead, like many people across the world right now, this pup’s job has gone remote.

With the help of the San Francisco SPCA, Jagger and other therapy dogs have begun offering virtual therapy visits via Zoom.