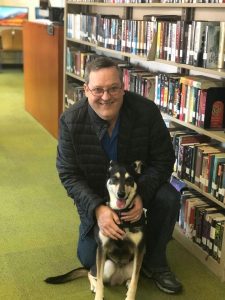 Chaplain Ron Leonard and his therapy dog, Molly, are making a difference in the lives of police officers and first responders in crisis through the Canines for Christ organization.

Recently, they visited Brentwood police officers to offer emotional support as they grieve the loss of officer Destin Legieza, who was killed by a drunk driver after he was finishing his shift on June 18.

“Molly and I were with about seven to 10 officers at the night roll call and have been visiting them and the 911 dispatchers affected by the tragic loss,” Leonard said. “I am partnering with Buffalo Wild Wings and Jet’s Pizza in Hermitage through December to provide a meal.”

Canines for Christ is an international Christian-based, animal-assisted therapy ministry that uses ordinary people and their beloved dogs to share God’s message of love, hope, kindness and compassion to the community. The organization is a non-profit 501c3 charity that has over 900 volunteers serving 36 states.

Leonard rescued Molly when she was six weeks old after she and her mom had been left to die in freezing temperatures. He knew she was saved to do special things. Since joining Canines for Christ in 2012, Molly has visited over 2,000 groups. The duo was also recently featured on “Fox and Friends” showcasing their work.

In 2017, Leonard started reaching out to 911 dispatchers and first responders across the nation to recognize the “hidden heroes” that protect and serve daily. Molly is now the crisis response canine for the Nashville Fire Department and a regular visitor with 911 dispatchers. Leonard is the chaplain on call with NFD and serves, “as the Lord directs.”

Additionally, the duo visits cancer centers, grief centers, children’s hospitals, nursing homes and other facilities. However, due to the COVID-19 pandemic, it has become more difficult to provide care.

“We’ve had to visit nursing homes through windows,” Leonard said. “It’s been challenging.”