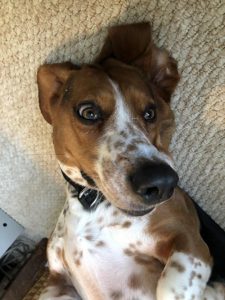 Those who own a dog can attest to their ability to lift mood, improve stress and bring joy by simply being there, unanswering, seemingly all-knowing and always delighted to see you.  Therapy animals are known for their calm and comforting nature, giving people a way to relax, de-stress and interact with a loving pet.  They can help people feeling upset, lonely or those who have been in traumatic situations.  Therapy dogs have been used in hospices, residential homes, hospitals and more and more commonly in schools.  Poor mental health within the student population is rising, becoming a more concerning issue.  Schools are trying hard to tackle this and therapy dogs maybe part of the solution.

I spoke to the school chaplain at James Allen’s Girls’ School, Reverend Cecil Schnyder, about her therapy dog Lina, who she brings to school with her.  I asked her about Lina’s life so far and the experiences she has had in order to become a therapy dog.  She answered saying, “I got Lina when she was just 14 weeks old.  I could carry her around in my cycling bag and take her to various school and nursing home visits.  So, Lina got used to visiting many new places and being gentle in people’s hands very early on.  Lina passed her assessment as a therapy dog when she was about 1.5 years old.  Lina is now 4.5 years old.” I asked her how many students on average Lina was seeing per day and she told me that during “one day in the senior school Lina sees about 50 young people and 20 adults.” However, this number increases when visiting the junior school and pre-preparatory school where Lina sees “about 200 girls.”

When questioning Reverend Cecil on the impact Lina has on our school community she replied, “I think Lina brings a lot of joy to JAGS.  Many pupils and staff come to visit Lina – to stroke her – touch her warm belly and silky ears- and leave feeling uplifted and a bit less stressed.  Lina is there, a warm, breathing, heart-beating creature that doesn’t judge you nor does she talk back.  Lina can listen and trust your knee to be her pillow.  Lina simply loves people – and in a school environment that can be stressful and tense, Lina brings something else.  She is simply there to greet you with a waggy tail and ‘tells’ you that all is going to be ok.  Some students come and sit with Lina to rehearse before an exam and some come and give Lina a stroke when they are upset.  And of course, it’s important to remember that Lina is a dog.  She is not left alone but sits in my office at all times.  This is important for the safety of the school but also give Lina a space to hide if and when she needs some space.”

Lina has clearly had a positive influence within the JAGS community, spreading smiles and warmth and reducing stress amongst all those who come to see her.  She seems relaxed and appears to enjoy the company of the students and staff.  We feel very fortunate to have her.