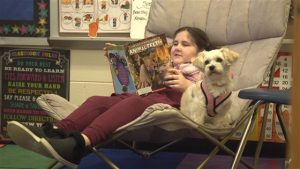 When Terry Gallogly trained her first therapy dogs, she had a simple goal: to bring joy to her little niece.

Lily was born in 2009 with a developmental disorder called lissencephaly, in which the brain does not have the usual creases and folds. The condition, also called “smooth brain,” affects her ability to grow, move and speak.

“There really wasn’t too much I could do for her,” Gallogly, of Smithtown, New York, told TODAY. “It was pretty severe.”

Even as a baby, there were moments when Lily seemed to light up, like when she saw her toddler big brother. That spark started Aunt Terry thinking about other ways to brighten Lily’s days.

“For her to smile, that was a huge thing, that was a huge movement,” Gallogly said, “and her brother could make her smile. I just felt that the energy of dogs and … small children were similar and I said I was going to get therapy dogs and visit her.”

Gallogly bought and trained two goldendoodle puppies named Ken and Barbie. At a year old, Ken was certified for “animal-assisted activities,” often referred to as dog therapy. She said it took six more months before Ken was allowed to visit then-4-year-old Lily in the hospital, but her reaction was instant.

“She’s in a wheelchair and I took her hand and put it on Ken’s head and she started processing right away,” Gallogly told TODAY. “We’ve been visiting … every week since.”

Ken, and later Barbie, started visiting other children at St. Mary’s Hospital for Children on Long Island, too. They play fetch and receive pets from the kids, some of whom Gallogly said had never interacted with a dog because they’d always been in the hospital. Lily is now 11 years old, surpassing estimates for kids born with smooth brain. Gallogly was touched by the response the children had to Ken and Barbie and wanted to be able to bring the therapy dogs to kids who went home. In 2016, she started the nonprofit Therapy Dogs of Long Island, which now brings certified dogs to people with physical or mental health challenges at private homes, schools and senior care facilities, in addition to hospitals. Animal-assisted therapy has been shown to help with psychological well-being in some studies, including for people in long-term care.

About three years ago, Victoria Gentile, a teacher at Fort Salonga Elementary School, called Gallogly to have her visit her special needs class. Many of her students have autism or learning delays and she thought the dogs could put them more at ease to help them progress.

This time, Gallogly brought her tiny-but-mighty shichon named Pumpkin. Gentile’s classes started with learning to line up when Pumpkin, and sometimes other small dogs, came. Eventually, she had them work on reading.

“When you read to a dog, they’re not judgmental,” Gallogly said. “It takes away that fear and it’s also the comfort of holding a dog when you’re reading or petting a dog while you’re reading … (the kids) actually think they’re reading to a dog.”

Studies in progress suggest that dog-assisted therapy might be a way to help kids with autism achieve goals and tasks, though more research is needed. Gentile said some of her students overcame their fear about reading time after therapy dog visits.

“Reading to dogs … has really made them feel much better about reading out loud,” Gentile told TODAY. “It decreases their anxieties.” One of the hallmarks of a therapy dog is an easygoing nature in many different situations. The dogs have to interact and respond in positive ways, even when people they are visiting are loud, accidentally step on them or have other behaviors that can scare dogs. That, Gallogly said, isn’t always something you can teach.

“It’s really the temperament of the dog,” Gallogly said. “Then it’s just regular obedience training, ‘sit, stay, come, leave it, off.’ They have to walk on a loose leash, so they have to be under control.”

At the senior care facilities, her dogs are ready to cuddle and play, even when the people are in wheelchairs or can’t speak or move quickly. The residents often laugh, hug and kiss the dogs and sometimes respond more to them than they do to other humans.

“What other instance can you go over to something that’s living and breathing, get love from and pet them, hug them,” Gallogly said. “They don’t care what your mental capacity is or what your physical or looks are … it’s that unconditional love and non-judgment I think that brings the most joy.”

Teens who are facing a lot of anxiety, and sometimes trauma, have been receiving visits, too. Nearly 32% of teens 13 to 18 years old experience anxiety, according to the National Institutes of Health, and nearly 5% have post-traumatic stress disorder. Many public schools have state mandates to increase mental health resources for their students.

After a teen from Freeport High School, in Freeport, New York, was killed last year, some students appeared to be struggling and Rosa Medina, a senior at the school, requested the therapy dogs. Gallogly and other volunteers began regular visits with groups of students.

“There was people in my class that were mourning, visibly, and the whole school just had that kind of feel to it,” she told TODAY. “There seems to be a stigma around mental illness, especially with … teenagers who don’t know much about it. So, I was thinking of a way to make mental health resources more palatable and so I thought of therapy dogs.”

The nonprofit now has 18 volunteer dog handlers, in addition to Gallogly, to manage the growing requests. They also train and certify therapy dogs.

“I feel totally blessed,” Gallogly said. “If you can bring joy to anybody, and you could, why wouldn’t you? And the dogs do that. I have that ability. I have those type of dogs that will go visit and bring joy.”