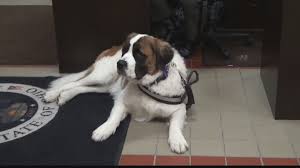 Most working assistance dogs wear a placard on their vest that says ‘Do Not Approach.’ A therapy K9 wears a placard that says ‘Pet Me!’

Belmont County Sheriff’s Deputy Jen Yuhase knew about therapy K9s, and noticed that her dog, ‘Jersey’ at an early age exhibited the characteristics that a therapy dog needs.

So, Jersey has been in training for about 10 months. Deputy Yuhase says Jersey is calm and obedient and sensitive to people’s needs. She just seemed to have a knack with children and with older people. She seems to know when to sit down so they can approach her.  Or if they can’t come to her, she’ll walk over and put her head in their lap. She just seems to know how to approach a situation and knows when someone wants to pet her. And she just loves to get petted. Loves it! This can be helpful especially for child sex abuse victims, victims of domestic violence or other traumatic events, to be more comfortable in being here and offering testimony when necessary.

Judge Vavra said he’s in favor of the program.

Jersey still needs to pass two tests to get the required certifications. However, she’s had an unique chance to get familiar with the courthouse, since it’s been closed to the public. She even sits in the windowsill of the courtroom.