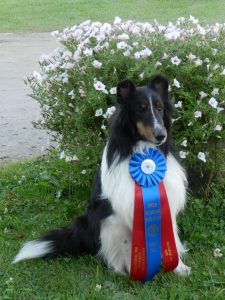 Missy, a 4-year-old Shetland Sheepdog,is owned, trained and shown exclusively by Wallingford resident, Linda Houle, who has groomed, trained and showed Shelties for 45 years. Missy is her 10th. Her dogs have traeled around the US. and Canada, provided pet therapy at nursing homes, won many photo contests, and have been featured in a TV commercial and newspapers and magazines. One was filmed in a pet therapy video. And her dogs have earned AKC and CKC titles. Missy began her training “on day one” with Houle, and is the fourth Shetland in the U.S. to earn the RACH title, and the RACH 2 title six months later. The titles indicate the dog has achieved a minimum of 300 championship points from the Advanced B, Excellent B and Master classes, with a minimum of 150 points from the Master class; and 20 triple qualifying scores obtained from the Advanced B, Excellent B and Master classes. Missy has earned the most prestigious achievements of being the number one Top Dog in the U.S., the number one Top Shetland Sheepdog in the U.S., and the number one Top Herding Dog in the U.S.