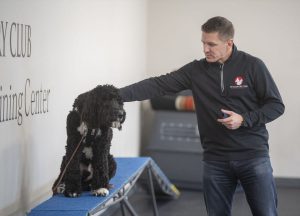 Seizures have affected Bre Upmeyer’s life since the third grade.

Her epilepsy diagnosis changed how her peers viewed her, it changed how she learned, it made her the last of her friends to get a drivers license. But it didn’t change her dreams.

Upmeyer had always dreamed of following in her mother’s footsteps and becoming a cosmetologist.

“This has been my dream job ever since I was little,” Upmeyer said.

Upmeyer struggled academically in high school, but graduated from cosmetology school and began to thrive working at a hair salon. She was able to move into an apartment with a roommate and start living her own life.

But this summer Upmeyer’s seizures got worse. In August she had such a severe seizure that she had to stop working and move back in with her parents. She couldn’t drive and was constantly in fear of when she would have her next seizure.

“Being a 22 year old, it’s hard living with your parents,” Upmeyer said. “My parents are awesome and very very supportive with this.”

That’s when Upmeyer decided it was time to get a service dog to warn her of oncoming seizures and hopefully give her back some of her independence.

Despite business being bad during the pandemic, owner of K9 Country Club Nick Lungu offered to train Upmeyer’s dog, Oakley, for free if she could cover the costs of boarding the dog while he’s being trained.

During the pandemic the usually full facility has struggled to make ends meet with customers working from home and not traveling boarding and daycare use has dropped off.

“We have multiple departments that are barely sustaining us,” Lungu said.

But Lungu wanted to keep his employees on and give back to community so he took on a few extra dogs pro bono.

“I try to take on two to three charity cases a year,” Lungu said. “That’s our way of blessing the community back.”

Upmeyer came to K9 Country Club having already purchased her dog Oakley, a Bernese Mountain Dog and Poodle mix, known as a Bernedoodle. Lungu evaluated Oakley and found that he had already bonded with Upmeyer, even as a young puppy.

They began training in September and Lungu hopes the entire process will take about a year and a half. Lungu and some of his staff members are donating their time to train the dog, while Upmeyer covers the cost of boarding Oakley four days a week. Normally training a service dog like this would cost tens of thousands of dollars for training alone, Lungu said.

Upmeyer was diagnosed with epilepsy after she started having absence seizures, that involved staring spells during a brief abnormal electrical activity in the brain, in third grade. About five years later she began having tonic-clonic seizures, that caused her to lose consciousness and convulse. They also took even longer to recover from.

A lot of things trigger Upmeyer’s seizures, she said, from stress to how spicy her food is. After seven years of adjusting her medication, Upmeyer finally settled into a good regimen she said.

Then when she was 20, Upmeyer’s seizures worsened. She was at home one evening when she had a severe seizure.

“I actually had broken my whole face,” she said.

She was sitting down to have dinner with her family when she fell face first out of her chair hitting her teeth on the hardwood floors, Upmeyer said.

“At our house we have two teeth marks on our hardwood floors because I hit so hard,” Upmeyer said with a chuckle.

She lost a few of her teeth and broke her jaw. Upmeyer still deals with the injuries from that seizure including having ongoing dental work.

“Seizures have always impacted my life but after that one it made a really big impact on my life,” Upmeyer said.

Upmeyer hopes that with Oakley warning her of oncoming seizures she can go to a private safe place to experience a seizure and hopefully avoid severe injury in the future.

“My biggest fear is having other people see it,” Upmeyer said of other people witnessing her seizures. “Because it traumatizes them, it really, really does, especially if I hit my face or if I break something, you know, it just freaks them out.”

Knowing she’ll have a warning before experiencing a seizure also takes away the fear of the unknown, Upmeyer said. The constant stress of potentially having a seizure anytime added to the likelihood she would have one, she said.

“It will take so much stress off because he’ll be able to warn me,” she said. “I’ll go out and not have to worry about having one you know, and that’s already a huge part of it.”

While the largest expense of training is covered, the cost of boarding Oakley will still be thousands of dollars over the next year, Upmeyer said. She has been unable to return to work full time since her last seizure in August so Upmeyer created a GoFundMe in hopes of raising the rest of the money.

Even with the uncertainty of how she is going to finish paying for Oakley’s training, Upmeyer said she is thankful to have come this far.

“I’m really like thankful for being to have Oakley because he’s literally going to, like, save my life,” Upmeyer said. “They have just blessed me so much to the point where I am lucky.”