Veteran And His Service Dog 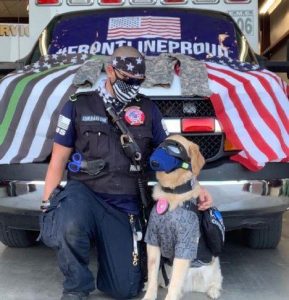 Veteran Louis Belluomini has an important message to share.

And on Veterans Day, he’ll share it with the nation as a guest on “The Rachael Ray Show.”

The Findlay man will appear before a national audience Wednesday to discuss his work as a paramedic during the COVID-19 pandemic, and what it’s like to have a mask-clad, goggle-wearing, four-legged sidekick riding on the ambulance with him. His is a story that’s been shared over the past four years in The Courier, but one whose chapters continue to be written.

Belluomini served nine years in the U.S. Army as a psychological operations specialist and military police officer in Iraq and Afghanistan. He was honorably discharged as a captain in 2015 and returned to Findlay as a broken man. A traumatic brain injury and debilitating post-traumatic stress disorder left him on edge and barely able to get through his shifts as a paramedic.

Vivid nightmares woke him up in the night and challenged his health and safety, along with his relationship as a newlywed. He and wife Jessica knew something had to change, especially with a new baby on the way.

As fate would have it, the couple learned of a nonprofit organization based in Florida called K9s for Warriors, the largest K9/veteran pairing agency in the country. Belluomini began training with Star, then a year-old golden retriever/Labrador mix, who would go on to change his life in ways unimaginable at the time of their pairing in 2016.

Star gave Belluomini the emotional support he needed to make it through grueling days at the EMS station. She made him feel safe during everyday activities like grocery shopping and driving on the interstate, and she immediately learned to sense when Belluomini was having a nightmare and how to gently shake him from his sleep. Star also became an inseparable playmate to the couple’s son, Silvio.

By Belluomini’s side 24/7, Star also became the first known service dog in America to ride on an ambulance, and continues to work alongside Belluomini as a part-time employee of Putnam County EMS. Pictures of Star, now 5 years old, outfitted in a mask, goggles and booties during the coronavirus pandemic, have circled the internet and may just be what caught the eye of producers at “The Rachael Ray Show.”

Belluomini’s interview with the celebrity chef, known for her love of dogs and her own line of dog food, was done last week via Zoom. Viewers in the Findlay area can tune in to WTVG at 10 a.m. Wednesday to watch the show. Belluomini said everyone on the show’s team went out of their way to make him feel relaxed and comfortable, and Ray herself was “super nice” and engaged during their virtual conversation. Ray even took the time to offer a personal hello to Jessica, after hearing that she was a fan of the show.

During his interview, Belluomini described working in Putnam County, which like many portions of rural America has been especially hard hit by the coronavirus over the past several months.

“I would say probably the majority of our calls are either COVID-positive or COVID-potential,” Belluomini said.

He explained that while it is standard practice for EMT’s to wear gloves when responding to emergency calls, masks were formerly optional. Belluomini said the pandemic has likely shifted the industry standard to paramedics always wearing masks, as an added safety precaution for themselves and their patients.

When a call comes in for a COVID-19 patient, team members must don a gown, gloves, goggles and an N95 or higher mask. The same goes for Star, who seems to have no qualms at all about masking up and heading to the scene of an accident or an ambulance run.

“If I’m taking the precaution, typically she is, too,” he said of the necessary PPE. “Even our dogs on the front lines are able to be safe and help protect others.”

Belluomini has also become an advocate at the local and national levels for the many benefits a service dog can provide veterans and others struggling with mental health issues. He is committed to educating the public on how to — or, more accurately, how not to — interact with service dogs when they encounter them in public. He and Star were even featured in a five-time-Emmy-winning documentary, “A New Leash on Life: The K9s for Warriors Story.”

He used his opportunity on the show to encourage other veterans who are struggling to seek help.

“Because of the stress and the world we’re in now … having a service dog can benefit so many of the frontline heroes,” Belluomini said.