Veteran Services Has A New Employee 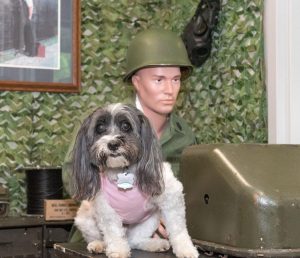 Animals have the ability offer a great source of comfort and support. While on the surface, the COVID-19 pandemic has been horribly tragic, there is a silver lining there. At least there is when it comes to Lincoln County Veteran’s Services. The director of Lincoln County Veteran’s Services, Alex Patton, is constantly looking for ways to better serve the county’s veteran population. This time, he’s not only found a way to help veterans, but also animals available for adoption at the county’s shelter.

In an effort to slow down the spread of the novel coronavirus, Lincoln County shut their offices down to the general public the middle of April. While they opened back up on April 27, many offices have reduced traffic. The veteran’s services office is no exception.

“Most of our cliental are a high-risk group,” Patton said. “They’re older and sick and wouldn’t be coming to see me if it weren’t to file a claim. We don’t want to put them at risk. I’m not going to completely open until June 1. If they need forms, I either send them by email or drop them off on their doorstep and call them and tell them they’re there. I don’t want someone to say they got sick coming to my office or sitting in the lobby. Believe me, I want people back in here, but I don’t want anyone to get sick.”

Last year, a joint program between Lincoln County Veteran’s Services and Lincoln County Animal Services was developed so that veterans could adopt a shelter animal for no fee, but Patton wanted to take this relationship further.

“We were thinking about potentially going to the shelter and bringing a dog here and letting them spend the day and then take them back,” he said. “But you don’t know every dog’s personality or who would be a good fit and who wouldn’t.”

Patton has had Lucy, a rescued small mix-breed dog for about five years. A pregnant Lucy had been left on the side of the road. She also had temperament issues that led rescuers to believe she had been abused in the past.

About a year ago, Patton started having church-related home groups at his house.

“There was a little, bitty girl who was less than a year old that her parents would bring,” he said. “She’d play on the floor while we had our meeting. Lucy and that little girl took up together. She could pull Lucy’s tail and do just about anything to her and she just let her. My grandson is four and they’d chase each other around the house. That led me to think that we could promote animal rescue and have her here for emotional support.”

When the county offices shut down, Patton would bring Lucy with him to the office as he answered emails or telephone calls to see how she’d do. Lucy has fit in like she was made for the job. Before Patton started bringing her to the office, Lucy didn’t like to ride in a vehicle, but that’s all changed. She races him to the car now.

“It shows that a pet can calm you down and offer you emotional support,” Patton said. “It also shows that you can go to a shelter and get a good pet. People have a perception of what you can get from the ‘pound’ and that’s so far from the truth. Lucy had some issues when we first got her, but she’s worked through them. She’s turned into a good lap dog.”

“It’s been a win-win situation,” he said. “If someone comes in and is having a bad day – well, you can’t pet Lucy and have a bad day for too much longer. I’m fortunate that I work for a good individual. Kelly (Atkins) has been adamantly onboard with this. He allows me to do a lot of things that other people may not be able to do to help veterans. This helps animal services too. There’s no downside to it.”