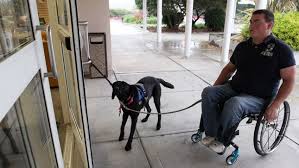 “Let the shameful wall of exclusion finally come tumbling down.”

When we celebrate the 30th anniversary of the ADA’s passage, it is important to acknowledge that, although the shameful wall of exclusion has been dismantled over time, it has yet to come tumbling down.

To this end, despite the great progress we have made in improving the lives of those particularly with visible physical disabilities, we still have a long way to go toward ensuring equality, particularly for those who suffer from invisible disabilities such as PTSD or TBI.

The progress that needs to be made about psychiatric or invisible disabilities has a disparate impact on certain aspects of the population, most notably veterans. As late as 2007, there was limited evidence about the scope of the problem or the most effective treatments.

Since that time, however, several studies, including one released this past week from Purdue University’s College of Veterinary Medicine, have shown that service dogs can greatly benefit veterans with PTSD. Specifically, the most recent study found that that service dogs could interrupt episodes of anxiety, proving to be the most useful, and most often used task the dogs performed.

However, despite this research, the use of service dogs for veterans with invisible wounds remains a controversial topic.

First, when it comes to the public perception of disabilities, our society as a whole remains overly focused on appearance. Although the ADA defines disability as “a physical or mental impairment that substantially limits one or more major life activities,” many veterans with PTSD report instances in which they are told that they “do not look disabled,” and after that discriminated against.

For example, Wanda Garneaux, a Navy veteran who has PTSD, was denied entry into an Atlanta restaurant after the manager told her that she didn’t appear blind and therefore did not need her service dog. Although Garneaux later accepted an apology from the restaurant manager who claimed to have misunderstood the law, she stated that what she wanted was for “people to educate themselves on the [ADA], and how to support people who are struggling.”

Second, problems with fake service dogs and emotional support animals being passed off as service dogs has complicated the lives of many veterans who truly need a psychiatric service dog, particularly when it comes to traveling.

Importantly, while psychiatric service dogs are protected under the ADA, the Act does not set a behavioral standard for service dogs, nor specify any standardized training process.

According to Rory Diamond, CEO of K9s for Warriors, a nonprofit organization that provides psychiatric service dogs to veterans, “Most of our graduates would rather not fly . . . We realize that their life is getting smaller because of fake and poorly trained service dogs, and we want their life to be big. We want them to have every opportunity.”

Similarly, Gina Esoldi of Next Step Service Dogs states, “When a veteran walks into a public store or restaurant and gets a stink eye because the person before him was there with a fraudulent dog, it puts a lot of stress on them.”

Over the past decade, Congress has grappled with how to handle the issue of psychiatric service dogs for veterans, but there is pending legislation that offers hope to many veterans with PTSD.

Currently, VA will only pay for service dogs for veterans with certain physical conditions, such as visual, hearing, or mobility impairments, and has stopped short of providing significant resources for veterans in need of psychiatric service dogs. This artificial distinction appears to contradict the ADA definition of disabilities for which service dogs may be used.

In 2010, Congress mandated that VA pay for a study on the matter. After years of botched methodology and rumors that VA set the research up to fail, results are finally expected later this summer.

In the interim, Congress can, and should, take matters into its own hands by changing the law and requiring VA to stop discriminating against veterans with invisible wounds by treating them differently from those with physical disabilities when it comes to the use of service dogs.

There are currently two bills pending, both known as the PAWS Act, one version of which unanimously passed the House in February. Both pieces of legislation, which enjoy bipartisan support, await action in the Senate.

At a time when veterans suicide and mental health concerns remain a top priority for veterans, stakeholders, and the VA, and are expected to increase as a result of the COVID-19 pandemic, it is paramount that lawmakers look beyond the status quo such as standard treatments with prescription medications to assist veterans who are struggling with invisible injuries.

“Mental wellness does not have a one-size-fits-all solution, which is why VA must provide innovative and out-of-the-box treatments to help veterans combat these invisible illnesses and thrive in their civilian lives,” said Rep. Phil Roe (R-Tenn.) the ranking member of the House VA committee. “There is no question that the companionship and unconditional love offered by man’s best friend can have powerful healing effects on men and women from all walks of life, including our men and women in uniform.”

Accordingly, in honor of the 30th anniversary of the ADA, the Senate should act swiftly in passing legislation that aids veterans with psychiatric service dogs, allowing “the shameful wall of exclusion [to] finally come tumbling down” for veterans suffering from invisible disabilities.