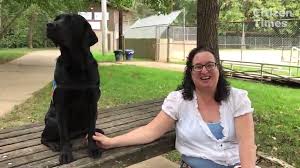 Nineteen years later, Tom Bowen is still reliving the physical and mental pain he endured as a first responder on 9/11 in New York City.

He was one of the heroes – a firefighter from West Virginia – who volunteered to assist NYC first responders who dug for endless hours, days and weeks through “The Pile” at the site of the World Trade Center after it was attacked by terrorist-piloted planes, sifting through the toxic rubble in search of humans, dead or alive.

But the father of three suffered not only bone fractures and bruises during that time, but long-lasting mental and emotional trauma, including PTSD.

At one point, he said, his wife told him, “You’re not the man I married. You’re not the father you could have been to our children.” Bowen knew he needed help to deal with his night terrors and post traumatic stress disorder. One of the ways he found it was through a Labrador retriever named Bragg. The service dog came to live with Bowen and his family in 2015, through the service dog training nonprofit, Paws & Effect, whose founder and executive director, Nicole Shumate, lives in Black Mountain. “She said, ‘this dog is not going to heal you, this dog is a tool in your belt. You have to also take care of yourself,’” Bowen said of Shumate. “A service dog isn’t going to make you all better. It’s a tool in your belt. There’s therapy, doctors, medication, staying fit, working on your diet, learning to trust your friends,” he said. But he would put Bragg at the top of his list.

“Bragg for me has been life changing,” he said.

He wasn’t sure how to explain lugging an 85-pound dog with him everywhere he went because he wasn’t blind or deaf.

“It forced me to have conversations with my parent and friends that I had never had since the (9/11) attacks. This is something in my life that can help, and it has four legs and fur,” he said.

“It’s a very serious illness, a serious struggle for a lot of people. Up until this point I haven’t slept through the night in 14 years. Having Bragg all the time, I feel more comfortable talking about it. For my parents and close friends, it’s allowed them to come to me and ask me questions. It’s caused them to do things and say prayers and send positive feelings and support my way.”

Bragg was trained by puppy raisers and then Shumate was his “finish trainer,” she said. He was the first service dog to be placed with a Ground Zero worker, she said.

“Bragg was named to both recognize Fort Bragg, the home of the Army’s Special Operations and Warfare Center as well as a specific soldier who graduated from West Point and subsequently lost his life in Afghanistan.”

She has placed 60 dogs with combat veterans, but on Sept. 7, Shumate placed the first combat operational stress dog, named Scout, on a military base, with Command Chaplain O’Lear at the Rock Island Arsenal in Illinois.

Since Shumate started Paws $ Effect in Iowa in 2006 as a speech and physical therapy dog service for children, she has expanded it to serve veterans and first responders in light of the growing incidence of PTSD and other mental health issues among these populations and the research showing the powerful healing effects of the human-animal bond.

A lawyer who also has an undergraduate degree in psychology, Shumate started out her career training search and rescue dogs in Breckenridge, Colorado. The focus of her legal work has been policy and legislation, and serving as an expert witness involving service dogs.

Shumate moved to Black Mountain in 2016, and maintains an outpost of the original company based in Iowa.

Puppies, mostly Labrador retrievers, are bred in Iowa, then sent to “puppy raisers” who train the dogs in their homes. The work is intense and takes about 18 months, Shumate says.

“The training is all positive reinforcement and clicker training. That is a type of training they use in commercial facilities like zoos and aquariums. It’s where an animal hears a unique noise when they have presented a behavior that you want them to present again,” Shumate said.

“We use a clicker, which is a unique sound in the environment, to let them know that they have performed the physical behavior that we prefer, like learning how to open doors or resting their chin on somebody’s leg. We work with the dogs to modify their physical behavior, but do it very humanely,” she said.

Once the dogs have graduated training, Paws & Effect gives them to individuals who show a need and an ability to take care of the dogs. But the nonprofit maintains ownership and pays for liability insurance, which can be more than $3,000 per dog. The clients must pay for the dogs’ food and veterinary care.

The way service dogs work with people who have PTSD is by keeping people in the present, Shumate said.

“Sometimes just the idea of a dog resting its chin on somebody’s thigh, or having the dog kind of stand behind somebody so that person isn’t approached by other people who get too close to them,” she said.

“The dog serves the role of helping their mind not drift, so that they aren’t concerned, and they aren’t bringing back up memories from having been in combat. The dogs are also very good at alerting veterans to an oncoming panic attack. That’s helpful if they can manage their panic attacks sooner.”

The dogs are trained to do this by tapping their nose into somebody’s hand in a super subtle way where no one else would notice. That’s the person’s alert that a panic attack is coming, and they can excuse themselves from a meeting, for example, Shumate said.

She had also placed a dog with Army veteran Wade Baker, of Clyde, who died by suicide in 2015.

“We’re very forward about that. Suicide is a possible outcome,” she said, mentioning that September is Suicide Prevention Month. “PTSD is comorbid to suicide.”

First responders in Asheville are also reaping the benefits of Paws & Effect.

In January, Shumate placed a service dog with the Asheville Fire Department, a Black Lab named Denali, who now resides at Station 7 in North Asheville.

Shumate says the pairing made sense, considering the rise of PTSD among first responders across the country. “Denali is a vital part of our station,” said Station 7 B-shift Capt. Mark Jameson. “She lives at the station for 20 days and goes away for 10 days. When she’s gone, there’s something missing at the station.”

After a pilot run, all members of the station filled out a survey saying they wanted Denali to stay, he said.

“She’s 100% a member of our family. We’re on 24 hours a day, so she can affect 15 people – five people per shift – and play a role in positive mental effect,” Jameson said, adding that Denali has received hundreds of hours of training in how to do that. We see some horrific stuff. You get back from a call and she’s there wagging her tail. She brightens the day. No matter how crappy your day was, no matter what happened. She makes it just a bit better, if not substantially better.”

But the study notes that very little attention has been given to subthreshold, or subclinical PTSD, that is, those who show symptoms but have not been fully diagnosed with the disease.

“This is where I think Paws & Effect has the largest opportunity to have an impact, to keep firefighters from experiencing the symptoms that would qualify them for a full PTSD diagnosis,” Shumate said. She said a new litter of “9/11” puppies were just whelped Sep. 9 in Iowa and will be heading to Asheville at the end of October to start their training.