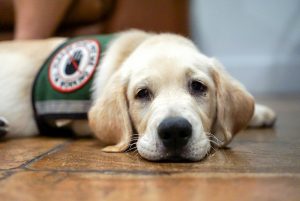 The problem of fraudulent service animals will continue despite the U.S. Department of Transportation’s recent attempts to remedy the issue. The time for public comment on proposed amendments to the Air Carrier Access Act service animal rule has ended with no promise that the amendments will remedy the situation.

The proposed amendment would do a number of extremely helpful things. To start, it would align the ACAA’s definition of a service animal with that of the Department of Justice’s Americans with Disabilities Act. Airlines would no longer treat emotional support animals as service animals, but as pets (which is still a highly contentious issue). And airlines would limit service animals to dogs, instead of the previous range of odd animals.

These are overdue changes to the law. However, the ACAA is also proposing to require passengers to complete a form attesting to their service dogs’ behavior, training, waste relief ability and vaccination record. Although these proposed changes appear to be helpful, they will not do enough to change a broken system. And they may simply add a burden for individuals with disabilities who want to fly.

The problem with the current ADA regulations and the proposed DOT’s regulations is that there is no national system regulating vets and verifies and licenses service dogs. This is equivalent to Americans printing out their own handicap parking permits without going through the DMV.

Many people are not aware that well-trained, legitimate service dogs often require extensive training (learning as many as 40 commands), medical assessments and behavioral assessments. They may cost upward of $40,000-$60,000.

The U.S. should create recognizable IDs for service dogs. Rather than having the Department of Transportation decree dogs are the only valid service animals, it should work with the ADA to establish a national licensing system.

As a clinical psychologist who works with individuals with mental health issues, many of whom ask for service dogs or have them, I believe strongly that legitimate service dogs are necessary. But we need to do better. The U.S. needs a centralized process that approves service dogs and provides credentials. Sadly, the Department of Transportation’s proposed amendments won’t get us there.