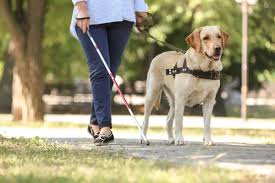 More videos have surfaced of people being inconsiderate and discourteous towards not only the owner of service animals, but the dog as well. Someone might be distracting the dog by cooing at it or asking if they can pet the dog. In some cases, parents, who should know better, do not tell their children to leave the dog alone. This type of event happens more often than not and oftentimes it is simply because the people around the dog do not know how to behave around them. They might also simultaneously not understand what the dog is meant to be doing. Understandably, most people see a dog and think “Puppy!” However, this “puppy” is actually doing their job, just like any other human.

There are many different kinds of service dogs that help so many people with a variety of different mental and physical disabilities. The task that a dog is trained for is what constitutes a service dog, as they are specifically trained to perform a task for someone with a disability. There are Guide or Seeing dogs, Hearing or Signal dogs, Psychiatric dogs, Sensory or Social Signal dogs and Seizure Response dogs. All of these dogs are labeled as service dogs and are allowed in public and social spaces where animals might not usually be allowed. Emotional support dogs are more meant to comfort and support their humans, and do not fall under the same rules and regulations as service dogs. An important distinction between an emotional support dog and a service dog is the training that the two undergo. Emotional support dogs are also simply called support dogs, as they are there for their humans more as comfort than to perform a specific task. However, both types of dog are trained to assist their humans and should not be distracted from their primary job.

What could happen if someone distracts a service dog? It depends on the disability that the dog is trained for. Distracting a Guide or Hearing dog can be especially dangerous in that their human has one less sense than the people around them. Their daily lives have been affected by their disability and their service dog might be the only thing that helps them get around. Some of the most dangerous places to distract a service dog are crosswalks and sidewalks. A service dog can get distracted anywhere and that can lead their human to getting injured.

If you can’t pet or acknowledge them, what do you do when you see a service dog? You leave them alone. They’re working after all, and their primary job is to keep their human safe. Guide dogs are their humans eyes, Hearing dogs are their humans ears and if they are distracted from that job, their human can get hurt very easily. You can admire the dog from a safe distance and quietly say to yourself or your friends that the dog is doing a very good job. It isn’t recommended to speak to the human about their dog either, but that is a case-by-case situation Some humans of service dogs love to talk and boast about them, and others like to be left alone unless they ask for help. The overarching thing to know about service dogs is they are not there for other people, they are there for their human and to keep them safe.

How do you even spot a service dog in the first place? Luckily, a service dog is usually found wearing a black and vibrant red vest, although they can be found in different colors like purple and blue. The different colors indicate different types of service dogs, but the most common vests are black and red. There are two standard patches on the vest, one on each side of the dog, that states that they are a service dog and they are written in big bold white letters. Some owners will put a variety of patches on the vest of their dog to express their disability as well as let people know that they should not distract their service dog. Some of these patches might explicitly say not to pet or acknowledge the dog. Some may say that the dog is working. Some may have a picture of the caduceus sign, which is often seen on ambulances and EMT uniforms. These are easy to see signs that inform an outsider not to pet, interact with or make eye contact with a service dog as those actions can distract the dog from their job.  Service dogs can be young or old, fluffy or skinny, friendly or shy, and can be any breed. They might be super tempting to pet and fawn over but at the end of the day, that dog is an extension of their human. They are doing their best to keep their human safe and they’ve trained long and hard to do so. The best thing that outsiders and bystanders can do is let the dog do their job and educate those in the area that the dog should not be distracted. You can be rest assured that the dog is being cuddled and fed well at home, wherever that may be.