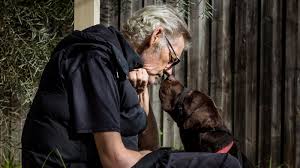 The black dog is Ron Fenton’s ever-present companion. Usually, it sits on his shoulder. Sometimes, it creeps up and whispers in his ear, telling him it’s time to have what Mr Fenton calls “a little chat”.

On the day the former policeman found out he had terminal liver cancer, it jumped right off his shoulder and screamed in his face, “Now! Now is the time!”

It was another dog – a chocolate-coloured Labrador to be precise – who saved him. For two nights, Mr Fenton’s canine companion Yogi sat with him patiently, nuzzling his hand insistently.

“For the second time in my life, Yogi talked me out of suicide,” he says.

Mr Fenton suffers from post-traumatic stress disorder, a diagnosis that can be traced to his near death on the job in 1984. A gunman who had murdered a security guard in Clayton opened fire on Mr Fenton’s police car, riddling the vehicle with 27 bullets and leaving 37 fragments in Mr Fenton’s head.

Mr Fenton survived the physical injury and the mental scars to achieve what he hopes will be his legacy long after the cancer takes him.

Yogi, his trained PTSD assistance dog, was donated to him in 2017 by a veterans’ charity and since then, the almost five-year-old Labrador has been a salve for his suffering.

But despite what Mr Fenton’s lawyer called demonstrable evidence of the dog’s effect, WorkSafe rejected his claim for the insurer to pay for Yogi’s expenses.

So Mr Fenton took legal action and, in an 11th-hour settlement just before he was due to go to court this month, achieved his goal.

It’s a win the 64-year-old hopes will make it easier for other emergency service workers to access financial aid for assistance dogs.

“I wanted to leave something behind,” Mr Fenton says.

“The boys [his ex-police mates] are calling it Yogi’s Law. It’s not a law, it’s just a precedent but I’m pretty proud of it.”

His lawyer, Kathy Wilson, from Melbourne Injury Lawyers, has been handling workers’ compensation claims since 1989 and this was the first assistance dog case she’s run.

Ms Wilson negotiated the settlement under the Accident Compensation Act, which stipulates WorkCover pays for the reasonable cost of services. She argued that under the act, the cost of Yogi was a personal or aide expense requested by a medical practitioner. Mr Fenton’s doctors wrote to the court saying that Yogi reduced the former policeman’s reliance on medication and need for psychological counselling. Yogi also stops Mr Fenton’s nightmares, pushing his paw on a pressure pad to turn on a bedroom lamp which wakes him before the terrors take hold. His GP added that it would be cruel for an insurer not to pay for Yogi.

“It should be heartening for people who may have had rejections and thinking they couldn’t do anything about it to now know it can be challenged and should be challenged,” she said.

A WorkSafe spokesman said in a statement it would meet annual accreditation costs for a trained psychiatric assistance dog.

Assistance dogs are a relatively new concept for the treatment of PTSD, with the federal government only now trialling dogs destined for veterans in a pilot with La Trobe University.

Assistance Dogs Australia’s Richard Lord, who runs one of the few accredited suppliers of PTSD dogs in the country, said Mr Fenton’s win was a step in the right direction.

“More and more people are going to see how these dogs are helping people who are injured and traumatised through the work they do and there will be more support for the organisations supplying these dogs,” Mr Lord said.

With the win for Yogi under his belt and his first grandchild being born, Mr Fenton says he has a lot to live for, even if his cancer diagnosis gets in the way.

“No one is getting out of this game alive. We’ve all got to die of something, at least I’ve got some sort of ability to prepare,” he says.

And if the black dog comes, he has the chocolate one dropping a slobbery tennis ball at his feet.

“When I’m down, he brings a tennis ball and says, ‘come on Dad, play’, until I give in and get outside, get fresh air and change my mindset.”